When it comes to relationships, few things annoy me more than the fact that a couple of decades into the 21st century, I'm still largely looked upon as an extension of my husband.

The way marriages and relationships are often discussed are dripping with sexist and control-oriented terminology that emphasise power dynamics over communication.

Here are seven relationship phrases that belong to centuries past.

Does your spouse let/allow you to…?

You've heard me get on my soap box about this before. No, my husband doesn't “let” or “allow” me to do anything because I am my own person and I decide what I do. I didn't stop being an individual when we got married and neither did he.

I can't tell you the number of times I've been on a trip for work or leisure in which the first question I get after the person I'm talking to realises I am both married and (gasp!) travelling somewhere alone that the conversation turns to, “What does your husband think about that?” “He lets you do that?” “He allows that?” Unsurprisingly, but no less annoying, is the fact that none of the partnered men usually endure the same line of questioning.

Does that mean we never discuss our plans or just go and do whatever we want without thinking about the other person? Of course not. But we communicate, we don't hold some “permission” card over the other.

Brownie points. I hate this one. The idea that relationships are about doing a bunch of good deeds so that you can justify otherwise shitty behaviour. That doing a nice thing is like collateral for when you screw things up and then you're all “square”. Or that any problem can be fixed with some “sucking up”.

Don't get me wrong, everyone makes mistakes and there is nothing wrong with trying to right a situation by doing something nice for your partner. But it should absolutely not be a relationship strategy to just make them “not mad at you anymore”.

As soon as I hear “brownie points” or its sister phrase “get in his/her good books” or that you're doing something to “get out of the doghouse” (ugh to all of those), all I hear is that this person doesn't truly value their partner as an individual. Their actions are about getting the relationship back to a place where they get the benefits of being in a relationship, but aren't interested in actually putting in the work for a partnership in which both people can thrive.

Just be a good partner. Contribute positively to the relationship because you care about that person. Not to get in the black for the next time you're in the red. This isn't the Dow Jones. Take your points and bargain with them elsewhere.

This one's often used as a derogatory way to refer to strong, confident women in heterosexual relationships. If she voices her opinion, she's considered too assertive, domineering, opinionated, pushy, and the list goes on.

Actually the whole phrase is sexist in nature because “pants” stereotypically refers to men and it's assuming the person wearing the pants is the one in charge. There's nothing about it that implies an equal partnership. It's a phrase used to demonise women and emasculate men.

Homosexual couples also endure this patriarchal outlook, where again the person who is deemed to take a stronger role in decision-making in the relationship is supposedly wearing said pants. There is also this warped assumption that one partner must take on a stronger (“male”) role and the other a more submissive or feminine (“female”) role. Sound presumptuous and ridiculous? Because it is.

Whipped, under the thumb

This is the derogatory term for the person who isn't the one “wearing the pants”. They are the one who is supposedly submissive, controlled, weak, don't speak up and just do whatever their partner tells them.

It's often men who get labelled with this one. In heterosexual relationships, men are usually not referred to as “wearing the pants” because that is their expected role, but when their partner “takes on that role” then he is “whipped” or “under the thumb”. It's just the same crap as above but in reverse. Sigh.

The really crazy thing about all of this is, is that it's still considered socially acceptable to use this language when talking about relationships, in fact it's pretty commonplace. All of these turns of phrase, whether applied to men, women, gender fluid or non-binary people, are used to imply that one person “manages” the relationship.

It's rhetoric that is damaging and far removed from what relationships should be about: true partnerships in which both individuals have a voice that is respected.

Are there people who find themselves in less than ideal relationships who do struggle with the impacts of negative power dynamics? Absolutely. And that needs to change. A really big step forward in that is expecting partnership as a baseline for relationships, and that first stems from how we frame, value and talk about those relationships. Language matters. Behaviour matters.

If you use any of these phrases, you're not helping your relationship or those of others. You're submitting to the same old idea that “women are X”, “men are X” and that relationships are either to be endured or are just some point-scoring game.

It's time to stop generalising, to start thinking about relationships as the diverse partnerships they are and should be, and start adjusting our language and behaviour accordingly.

What negative relationships phrases do you despise that you'd add to the list? 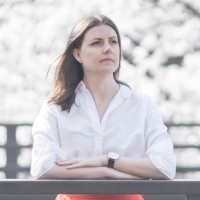 Australian travel writer formerly based in Tokyo, writing about solo travel when married (in a relationship).

You’re not working from home, distance learning or anything else right now

This site uses Akismet to reduce spam. Learn how your comment data is processed.